Five years into green biotech it was time to try something new (my former employer helped me in this by deciding it was time to leave Germany (mostly)). From 2013 on I worked as a Senior Consultant for the IT branch of BASF group (which has recently been rebranded as BASF Business Services GmbH -but we still do IT ;-).

After my first not so lucky visit to the world of economy and free markets, I decided it would be the right move to do some post-doctoral studies. Until mid-2007 I have been working as a bioinformatics computer scientist at the MPI for Developmental Biology in Tübingen. 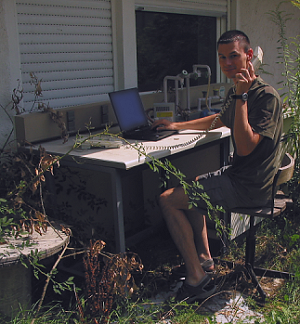 While finishing my Ph.D. I have been hired by Exelixis Deutschland GmbH, the -no longer existing- german branch of Exelixis Inc. from South San Francisco. The picture to the left shows me, sitting in front of our building in Tübingen, the former MPI for Biology (no, that picture was taken prior to the liquidation of the company ;-) ).
Retrieved from "http://www.marcsaric.de/index.php?title=Postdoc&oldid=3013"
This page was last edited on 12 May 2021, at 00:04.
Content is available under Creative Commons Attribution Share Alike.
Privacy policy
About MarcsHomepage
Disclaimers